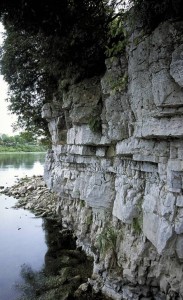 At rare, the reef-formed limestone outcrops along the south shoreline of the Grand River form an 14-metre cliff face and a landscape of trees, canopied interior cliffs that give way to pitted limestone plain and alvars – a unique habitat in Waterloo Region. A fern-dominated plant community exists along the cliff face with associated rim flora that includes very old eastern white cedar and eastern hemlock – flora similar to the ancient cedar forests along the Niagara Escarpment. The treed limestone plain has black maple, bitternut hickory, butternut, black oak and common hackberry.

The understory includes rare shrubs, burning bush and moonseed, as well as bladder-nut and American prickly ash. Many of the 80+ species of mosses and liverworts on the property occur within this landscape. The spring ephemeral wild flower display includes showy orchis and small yellow lady’s slipper. Other flowering plants include three species of gentian, Maryland figwort and hairy beardtongue. As well, there is a wide variety of invertebrates and vertebrates with habitat-dependence on the cliffs, alvars and wetlands. Species of snake and salamanders including the regionally rare smooth green snake lie deep within the fractured and cavitied limestone protected from the extreme temperatures of winter and summer months. In this diverse landscape, 95 species of birds have been recorded. Since the mid-90s, bald eagles have perched in the large trees along the cliffs at the river’s edge on rare. Bald eagles hunt this reach of the Grand River primarily in winter although, recently, have been observed here into mid-May.

The abandoned rail line that traverses the southern portion of the Cliffs and Alvars, the Grand Trunk Trail, is maintained by the City of Cambridge.

The vision for the Cliffs and Alvars is to provide seasonal-use public walking trails for the understanding and enjoyment of this unique geological feature and to both maintain and enhance the natural landscape and biodiversity of these reef-formed limestone outcrops. Protection and management of the cliff edge and cliff face habitats will be given high priority since they represent a habitat type identical to that of the Niagara Escarpment. The alvars, a globally rare habitat type, that extend inland from the cliffs require both protection and management and provide opportunity for research in restoration ecology.