Celebrating another environmental first in our Region 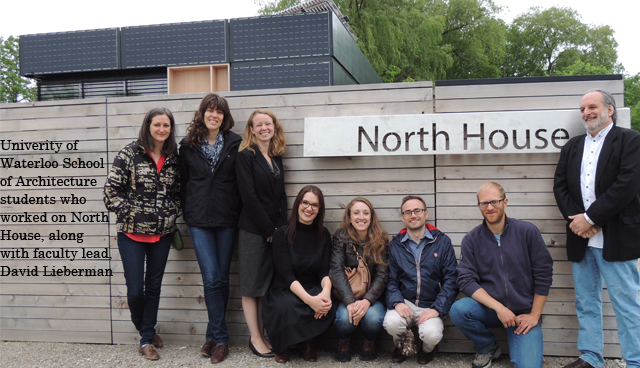 North House Opening’s ribbon-cutting of new donor sign on June 07, 2013. From left to right: Linda Hasenfratz of Linamar; Rob Deutschmann, Mayor of the Township of North Dumfries; Keith Ainsworth, Chair of the Board at rare; Savvas Chamberlain of the Savvas Chamberlain Family Foundation.

Cambridge/North Dumfries (June 6, 2013): Today is an exciting day for rare Charitable Research Reserve, the University of Waterloo and for all of the residents of Waterloo Region.

Today marks the official opening of North House – a solar-powered green housing prototype at its new permanent home at rare. The house will play a vital role in rare’s Chain of Learning concept and in the university’s ongoing research efforts.

Donors, key partners and dignitaries were on hand today to mark the opening of North House as an institute for research and education here in Waterloo Region.

The Chain of Learning program allows children to benefit from research done by senior scientists and passed on to the youngest visitors to the reserve.

North House was designed and built by students and faculty at the University of Waterloo and Ryerson University in Ontario and Simon Fraser University in British Columbia and it won acclaim in 2009 when it placed fourth at an international solar decathlon organized by the United States Department of Energy.

The house was taken apart after the competition and stored until last spring when crews arrived at rare to begin the long and challenging process of reassembling it and making sure that all systems were functioning properly.

“Today we celebrate the success of that venture and all of the promise North House holds for the future,” said Patti Leather, Director of Community Relations for rare.

“It has been a massive undertaking and we are overjoyed as we celebrate that achievement today and imagine the many ways that this procurement will serve our community and provide more examples of how rare is a special place.”

Transporting and assembling North House at rare cost approximately $400,000 and was made possible in part with support from The Savvas Chamberlain Family Foundation; The Musagetes Foundation; Wade and Lisa Brown; Gateman Milloy; Linamar; The Region of Waterloo Community Environmental Fund; University of Waterloo; Mackie; Ecologix; Cambridge and North Dumfries Hydro; and the Kitchener and Waterloo Community Foundation – The McMurtry Family Fund.

Several former students of the University of Waterloo’s Team North were present. Lauren Barhydt Team North Project Coordinator said, “I was asked to speak from the heart, and my heart is bursting with excitement right now. It’s incredible to revisit North House and we’re so happy that it is at rare.”

Dr. Savvas Chamberlain and Linamar’s Linda Hasenfratz were on hand to help with the ribbon-cutting. Positive remarks from funders of the project like Chamberlain, and Ken Livy representing Gateman Milloy, were a testament to the talents in our community and the good work of the rare organization. And yet still so few people in our Region know of this special place. “I’ve lived in this community for 40 years and only in the last couple did I learn about this organization,” Chamberlain told guests at the opening.

Erecting North House at rare will tie in well with rare’s goal of preserving the 900+-acre plus reserve for future generations by focusing on research, education, conservation and ecological restoration.

Some of the special features at North House includes:

·      New window and shading systems.
·      Use of passive solar heating systems to minimize the demand for heat.
·      Solar energy used to produce domestic hot water.
·      Special materials in the floor of North House used to capture the sun’s heat during the day and release it at night, regulating temperature.
·      Highly insulated, quadruple-glazed, floor-to-ceiling glass was installed on the south, east, and west sides for passive solar heating during the winter as well as a connection to the outdoors.
·      Automated coverings on the outside of the glass hold heat in during the winter and keep it out in the summer.
·      An extensive computer system that allows residents to see and control their energy use from a desktop computer or remotely from a computer or iPhone.

It simply makes sense to bring North House to rare and the community agrees. Learn more about the North House here.

rare Charitable Research Reserve thanks, for their tremendous support: